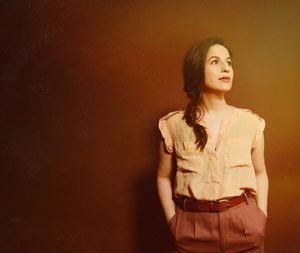 Join Robin Young, co-host of WBUR's Here & Now, for a performance and conversation with award-winning songwriter and performer Shaina Taub. For the past three years, Taub has starred in her musical adaptations of Shakespeare's "Twelfth Night" and "As You Like It" at the Delacorte Theater as part of the Public Theater's Public Works initiative.

A winner of the Jonathan Larson Grant, the Fred Ebb Award and the Kleban Prize, Taub has released two solo albums ("Visitors" and "Die Happy"), has played in Lincoln Center's American Songbook series and with the New York Pops at Carnegie Hall. She and her band performed in the critically acclaimed run of Bill Irwin and David Shiner's "Old Hats" at the Signature Theatre. Taub is currently at work on a new musical about Alice Paul and the American women's suffrage movement and is writing lyrics for "The Devil Wears Prada" musical with music by Sir Elton John.