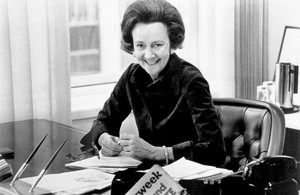 In conjunction with the New-York Historical Society exhibit, "Cover Story: Katharine Graham, CEO," Robin Young, co-host of WBUR and NPR's Here & Now, moderates a conversation about the progress women have made as leaders in news media throughout history and particularly in the last year.

Both in-person and virtual tickets are available for this event.

About "Cover Story: Katharine Graham, CEO"
Native New Yorker Katharine Meyer Graham never expected to become the president, publisher, and CEO of the Washington Post, but she thrived in that position—and even helped end a war and a corrupt U.S. presidency by revealing the Pentagon Papers and Watergate to an outraged public. On display in the Joyce B. Cowin Women’s History Gallery at the New-York Historical Society, this exhibition examines a transformative period in Graham’s life, as her devotion to the Post helped her grow from a self-effacing widow into an authoritative, decisive media executive.