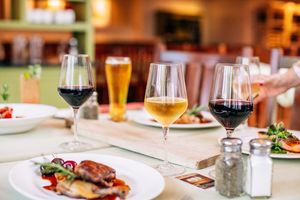 This four course menu has been created by Chef Peter Davis of Henrietta's Table and beautifully paired with delicious California wines. As you enjoy your dinner, learn about the winemaking process from Steven Burgess of Burgess Cellar Wine in Deer Park, CA.

$120 per person inclusive of Tax and Gratuity

Steven Burgess was actually born during the winery’s first harvest!

Steven Burgess did not always work in the family business. He earned degrees in Agricultural Systems Management and Agricultural Business as well as a Wine-Marketing Certificate. Steven was a high school physics teacher, wine representative, night barman and restorer of vintage trailers. In 2004 his father, Tom, persuaded him to return to Burgess Cellars. In 2013, Steven was promoted to President of Burgess Cellars making it a true Second Generation family business.

In addition to many aspects of managing the vineyards, winery and travelling throughout the United States promoting Burgess Cellars’ wine, he can often be seen doing some carpentry, welding, repairing a vehicle, mending stone walls from the 1800s or helping with the harvest. Steven fills his rare spare time cycling, camping, tinkering and cleaning up after his kids. He serves on the Wine Service Co-op Board of Directors and is a Volunteer Fire Fighter for the local station.

Ask Chef Peter Davis to describe his culinary philosophy, and he’ll tell you “fresh and honest,” or the long version: “fresh from the farm and honest-to-goodness New England cooking.” Davis is an avid conservationist, with close ties to New England’s fishing and farming communities. He is proud about the use of products grown using sustainable agriculture methods and native ingredients when creating dishes at Henrietta’s Table, the restaurant he opened in The Charles Hotel in 1995. Chef Davis was one of the first proponents of local products, and he has featured his local suppliers of fresh produce, fish, and game in his cookbook Fresh and Honest.

Davis is a Boston native who honed his skills around the globe before returning to his hometown. After cooking in the kitchens of the Hyatt Singapore, the Bali Hyatt, the Grand Hyatt in Hong Kong, and the Beverly Hills Peninsula, he was tapped to create a restaurant within the Charles that reflected the hotel’s hybrid culture of contemporary energy and classic New England style. Henrietta’s Table, named for the 1,000-pound pet pig kept in Martha’s Vineyard by Charles Hotel owner Dick Friedman, has earned raves in The New York Times, wherein Pooja Bhatia claimed it “has the richest brunch in town” and sang the praises of its “perfectly cooked steaks, fish and pork” and its “rustic, easygoing vibes.” In 1999 Food & Wine called the dining experience “outstanding,” and in Travel + Leisure Frank Rose called the restaurant “wonderful.”

In addition to serving The Charles Hotel’s hungry guests and visitors, Henrietta’s Table has played host to, and provided food for, an annual concert to benefit the Farm School, a family run educational farm in Athol, Massachusetts. The Farm School provides multi-day residential school-year and summer programs for more than 1,500 young people and their teachers, a yearlong apprentice program to train adults in modern sustainable agriculture, and an on-site school. It doesn’t get any more fresh and honest than that.