Henning Ensemble to premiere works for flutes, horn, and percussion 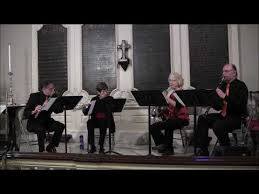 The Henning Ensemble (Peter H. Bloom and Carol Epple, flutes; Pamela Marshall, French horn; and Karl Henning, percussion) will perform premieres and recent works by Karl Henning and Pamela Marshall. The ensemble is active in Boston and beyond, and each of the musicians performs widely in solo recitals and with diverse chamber groups.

The King's Chapel Tuesday Recital Series presents weekly performances spanning chamber music, jazz and other genres. Admission is by suggested donation of $5; the donations are given to the performers. For more information, please call 617/227-2155.

Peter H. Bloom, flute, whose playing has been called “a revelation for unforced sweetness and strength” (The Boston Globe), performs in the U.S., Canada, Europe, Asia, New Zealand, and Australia; is featured on 45 recordings; is contributing editor for Noteworthy Sheet Music; and is a winner of the American Musicological Society’s Noah Greenberg Award. In a career that spans chamber music from the Renaissance to the 21st century, he performs with Ensemble Chaconne, The Olmsted Ensemble, The Karl Henning Ensemble, mezzo-soprano D’Anna Fortunato, and other esteemed artists. He is a noted jazz musician, veteran of the legendary Aardvark Jazz Orchestra (46th season). He holds an MM with distinction in flute performance from New England Conservatory and a BA (philosophy) from Boston University.

Carol Epple has performed throughout the Northeast and locally for Young Audiences, with Commonwealth Chamber Players, Boston Baroque, Handel and Haydn Society, Cambridge Society for Early Music, and the Monadnock and Castle Hill Festivals. She is on the faculty of the Longy School of Music, Powers Music School, Music on the Hill, and the Middlesex School. Carol Epple received her B.A. from Brown University and M.M. in flute from the New England Conservatory of Music.

Karl Henning holds a B.Mus. from the College of Wooster (Ohio); an M.A. from the University of Virginia; and a Ph.D. in composition from the University of Buffalo, where he studied with Charles Wuorinen and Louis Andriessen. He has concertized as a clarinetist in Estonia, Russia, and throughout the United States, and his music has been performed in North America, Europe and Australia.