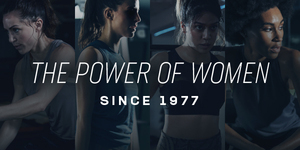 We are celebrating our anniversary with phenomenal HWX classes and giveaways!

All classes as part of this fitness series are FREE and open to the public.

During every class, participants will storm the studio with phenomenal prizes including gift cards to:

Since 1977, Healthworks Fitness has been demonstrating The Power of Women.

This October, Healthworks and Republic Fitness are celebrating their anniversary and the right to exist. The challenges they've overcome have made the brand stronger than ever. In 1997, a man sued Healthworks claiming that an all-women’s club was discriminatory. The members and staff worked hard in court to fight for the right to exist. While they lost in court, in 1998, Governor Paul Celucchi signed into law allowing single-sex clubs to operate.

Healthworks is more than a gym. This is a community of strong and empowered women. And Healthworks Fitness is here to stay!

40 Years of Furthering Fitness: A Timeline of Healthworks’ History

• When booking your class, be sure to double check the location and time. We have classes at multiple locations and we want to make sure you arrive at the correct class.

• Healthworks is a woman's only gym. If you are a man, feel free to sign up for Republic Fitness classes.

• For Cycle classes, we have bikes where you can clip in with your own spin shoes or simply wear your regular sneakers.

• You are welcome to arrive early and use the fitness floor equipment, steam, and sauna.

• These classes are in high demand, and we want everyone who wants a workout to get in, sweat, and be eligible to win these amazing prizes. If you flake, you will be removed from our event distribution list. Please email us and let us know you are canceling at least 4 hours before your class time. Please and thank you for being considerate.

• Healthworks and Republic members, please do not register yourself or your friends for classes via Eventbrite. These events are open to you via your account and open to your friends by talking with the front desk or emailing. This is a specific campaign for the larger community.