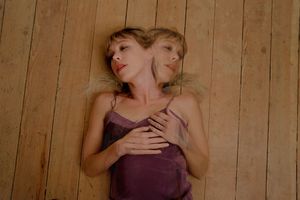 Hayley Thompson-King is a mezzo-soprano, composer, and performance artist from Sebastian, Florida with a Masters Degree in Opera from New England Conservatory of Music. Since 2012, Hayley has written, co-produced, and recorded three full-length albums - the third of which entitled Sororicide is to be released May, 2020 on Hard To Kill Records. Her work explores the duality in her own voice synthesizing fragments of rock & roll, Americana, opera, and art songs.

Hayleys 2017 album, Psychotic Melancholia, was praised as a jaw-dropping exposition that celebrates the entire canon of rock n rolls energy, and should be considered an upping of the ante on the gritty sonic real estate of garage, punk, country, and Americana, into some amalgam altogether more apt of Thompson-Kings wondrous artistic aptitudes (Paste Magazine). Her forthcoming multimedia performance piece and album, Sororicide, interpolates her own arrangements of arias from Maurice Ravels L'enfant et les sortilèges and Samuel Barbers Vanessa with her original compositions to tell the story of an artist whose inner voice speaks so loudly that she believes it is actually the voice of a parasitic twin she absorbed in utero. Sororicide incorporates live performance and visuals with a stop-action animated collage created in collaboration with the artist Good Ribs from Whitehall, MI. Sororicide was produced by Sean Slade and engineered by Benny Grotto; and musical collaborators include Malcolm Travis (drums), Chris Maclachlan (bass), Pete Weiss (guitar), and The Legendary Rich Gilbert (pedal steel).