Have Fun, Be Yourself: A One-Man Show by Andrew Mayer 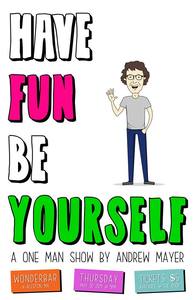 Andrew Mayer has been performing Stand-Up Comedy in and around Boston since his start in 2004. He recently won the Boston Comedy Festival, and has performed around the country in events including the Bridgetown Comedy Festival and Seattle Comedy Competition. His debut album, Nonsense, was released in 2015.

"Have Fun, Be Yourself" centers around stories based in anxiety, sincerity, and love, mostly. It is, in theory, still a comedy.