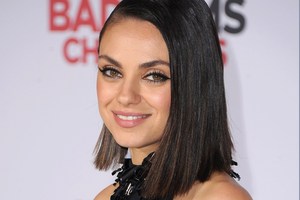 The Hasty Pudding Theatricals, the oldest theatrical organization in the United States, announces Golden Globe nominated actress, MILA KUNIS, as the recipient of its 2018 Woman of the Year Award. The Pudding is excited to honor a talented actress, whose career has taken her from television to film and now to producing as well.

The Woman of the Year Award is the Hasty Pudding Theatricals’ oldest honor, bestowed annually on performers who have made lasting and impressive contributions to the world of entertainment. Established in 1951, the Woman of the Year Award has been given to many notable and talented entertainers, including Meryl Streep, Debbie Reynolds, Julia Roberts, Scarlett Johansson, and most recently Octavia Spencer.

The Woman of the Year festivities will begin at 2:45p.m. on January 25th, 2018, when Ms Kunis will lead a parade through the streets of Cambridge. Following the parade, the Hasty Pudding Theatricals will host a celebratory roast for the actress. At 4:00 p.m., Ms Kunis will be presented with her Pudding Pot at Farkas Hall, the Hasty Pudding’s historic home in the heart of Harvard Square since 1888. A press conference will follow the presentation.

“We could not be more excited to give Mila Kunis our Woman of the Year award! We have been watching her on both the big and small screen since we were young and can’t wait to celebrate her achievements in a truly unique and memorable way,” said Hasty Pudding Theatricals co-Producer Annie McCreery. “Everyone in the company is really looking forward to meeting her. If she’s even half as fun as her character in Bad Moms then we’re sure it’s going to be a great time for all!” added Hannah Needle, the Pudding’s other co-Producer.

MILA KUNIS has established herself as one of Hollywood’s most sought after, vivacious, and engaging actresses. Since beginning her career in acting, she has garnered an impressive body of work that includes both major motion picture and television roles.

Kunis recently starred in the STX hit comedy Bad Moms opposite Kristen Bell, Christina Applegate, Kathryn Hahn and Jada Pinkett Smith. She then went on to star in the much-anticipated sequel, Bad Moms Christmas, which released in November 2017.

She most recently wrapped production on the Lionsgate film, The Spy Who Dumped Me, alongside Kate McKinnon, releasing on August 3rd, 2018.

In 2010 Kunis starred as ‘Lilly’ opposite Natalie Portman in the critically acclaimed Golden Globe and Oscar nominated supernatural drama Black Swan, directed by Darren Aronofsky from Fox Searchlight. Kunis was awarded the Marcello Mastroianni Award for ‘Best Young Actress’ for her performance in Black Swan at the 2010 Venice Film Festival. Kunis was also nominated for ‘Best Supporting Actress’ for her performance for the 2011 SAG, Golden Globe, and Critics Choice Awards.

Kunis is best known for her roles on two of Fox’s most successful shows: That 70’s Show and the animated Emmy nominated show Family Guy. On That 70’s Show she played ‘Jackie Burkhart,’ which earned her two Young Star Awards for ‘Best Actress’ in a Television Series. On Family Guy she is still currently the voice of ‘Meg.’