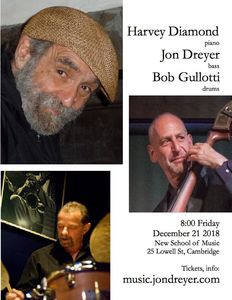 Tickets https://www.brownpapertickets.com/event/3976574 or at the door.

The legendary jazz pianist Harvey Diamond has graced the Boston area for decades with his music which is at once both deeply intricate and deeply emotional to even the most casual listener. Over the years he has performed across the U.S. and in Europe. among Lennie Tristano's last students in the 1970's, and has done concert appearances with NEA Jazz Masters Sheila Jordan, Dave Liebman, and Art Farmer, and also with Charles Neville, Herb Pomeroy, Harvie S, Jay Clayton, Joe Hunt, Don Alias, Jason Palmer, Cameron Brown, Marc Johnson, Marcus McLaurine, and many others. He has released his second CD as a leader, Fair Weather, with Cameron Brown. This follows is first CD, The Harvey Diamond Trio. Cameron Brown says of Harvey, "Harvey Diamond is a unique and brilliant musician: a pianist's pianist with a remarkable touch, unimpeachable technique and enormous dynamic range. A creative and unpredictable improvisor, Harvey's roots go back to Lennie Tristano and Bill Evans, spiced with just a touch of Cecil Taylor. He draws the audience into his world and holds it spellbound." Critic Steve Elman of The Arts Fuse says, "Pianist Harvey Diamond … is almost as revered among Boston musicians as the Dalai Lama is in Tibet."

Tickets https://www.brownpapertickets.com/event/3976574 or at the door.