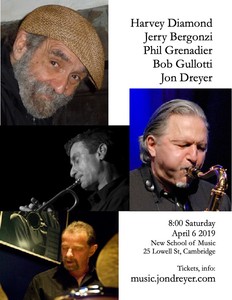 Tickets https://www.brownpapertickets.com/event/4204583 or at the door.

Tenor saxophonist Jerry Bergonzi is an internationally recognized jazz performer, composer, author, and educator. Bergonzi has performed throughout the world at all the major jazz festivals and jazz venues, with his own ensembles as well as with numerous jazz greats. His music is renowned for its innovation, mastery, and integrity. His discography includes more than 60 recordings, notably Standard Gonz with the Jerry Bergonzi Quartet on the Blue Note label; he also has 60 recorded song titles registered with ASCAP. As a clinician Bergonzi has taught at conservatories and music schools throughout the U.S. and Europe. He is the author of a series of instructional books with play-along CDs and videos, entitled Inside Improvisation, published by Advance Music (seven volumes: Melodic Structures, Pentatonics, Jazz Line, Melodic Rhythms, Thesaurus of Intervallic Melodies, Developing a Jazz Language, and Hexatonics), as well as the book/CD set Sound Advice. The Inside Improvisation series is now available in French, German, and Italian translations. Bergonzi is a three-time NEA grant recipient.

Tickets https://www.brownpapertickets.com/event/4204583 or at the door.