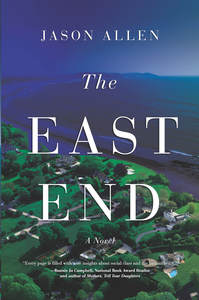 The fallout from a deadly accident shadows a Memorial Day weekend
celebration and upends three lives in a masterful debut novel set in the
Hamptons. Foregrounding pervasive anxieties over the ever-widening chasm
between rich and poor in this country, THE
EAST END can transports readers to a spot where monied elites
and working-class locals coexist uneasily—and occasionally, forge connections
that bridge the divide

Jason Allen grew up in a working-class home in the Hamptons, where he worked a variety of blue-collar jobs for wealthy estate owners. He writes fiction, poetry, and memoir, and is the author of the poetry collection A Meditation on Fire. He has an MFA from Pacific University and a PhD in literature and creative writing from Binghamton University. He currently lives in Atlanta, Georgia, where he teaches writing. THE EAST END is his first novel.

James Charlesworth’s writing has appeared in Natural Bridge and was awarded finalist status in Glimmer Train’s Short Story Award for New Writers. He is also the recipient of a Martin Dibner Fellowship from the Maine Community Foundation. The Patricide of George Benjamin Hill is his first novel. Originally from Pennsylvania, James attended Penn State University and Emerson College in Boston, where he currently lives.