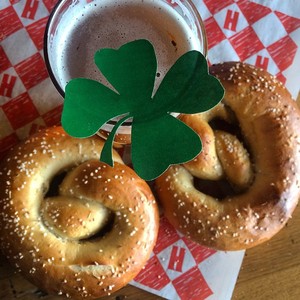 Round up your friends for a weekend of toe-tapping live music and freshly brewed Harpoon and UFO beers, including our newest member of the UFO family - UFO Apricadabra – and Harpoon’s limited edition Irish Red IPA The Craic.

Whether you’re half Irish, a quarter Irish, or you once met someone who was Irish, you can’t miss the Harpoon St. Patrick’s Festival.

In 2018, we are pleased to announce that we will be starting the festivities on Thursday, March 8th when we host The Harpoon Mac and Cheers Challenge – featuring some of Boston’s best restaurants competing for the title of Boston’s best mac and cheese. For more info on the weekend, please see https://stpatsfest2018.splashthat.com/ .

Admission: $25.00 door charge per person, includes one drink ticket and a souvenir cup. Cash bar. Attendees must be 21 years or older to enter and must present proper ID.

Advance Tickets: A limited number of pre-sold tickets can be purchased (for Saturday only) at https://stpatsfest2018.splashthat.com/ . Pre-sold tickets grant early admission (12:00 pm) to the Saturday of the Harpoon St. Patrick’s Festival.

Getting to the Brewery for St. Patrick’s Festival: Free shuttles will be running from South Station, or take the Silver Line (SL2 bus) to the Harbor Street stop. Parking is available for a fee in a parking garage across the street. Public transportation is encouraged!

About the Harpoon Brewery:
The Harpoon Brewery was founded in 1986 by beer lovers who wanted more and better beer options. When the Brewery was founded, Harpoon was issued Brewing Permit #001 by the Commonwealth of Massachusetts, since it was the first to brew commercially in Boston after a dormant period of about 25 years. Harpoon’s line of craft beer features its award-winning IPA and UFO beers, along with special seasonal selections. In 2000 Harpoon purchased a second brewery in Windsor, VT, making Harpoon the 19th largest craft brewer in the US. Harpoon has since introduced the limited batch 100 Barrel Series and the as well as the all-natural Harpoon Craft Cider made from freshly pressed apples.
In 2012 Harpoon was the recipient of the Green Business Award from the City of Boston. Harpoon has been recognized by the Boston Globe as one of Massachusetts’ Best Places to Work. In 2016 Harpoon was named one of the Top Charitable Contributors in Massachusetts by the Boston Business Journal. In August 2014 Harpoon became an employee-owned company.
For more information about Harpoon visit www.harpoonbrewery.com.