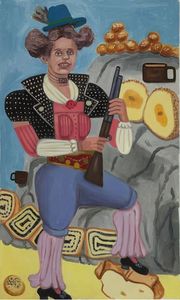 Hannah Barrett: Transitions is a retrospective mélange of works from the artist’s various series – from Secret Society to Monsters – that traces Barrett’s development as she progresses from collage to imagination as the source of her portraiture.

Barrett has previously described her paintings as “invented portraits based on collage: copies of photos or in some cases, copies of paintings are cut apart and reassembled into figures of ambiguous gender. Fusing the features of both sexes creates a range of androgynous characters that may be straight, queer, hermaphroditic or just cross-dressing.” Her aim is to create portraiture that deviates from the conventional male or female, and to explore the resulting pictorial and conceptual possibilities in a fun and unexpected way.

In her latest series Monsters, Barrett has created creatures that are fully of her own imagination, with no singular reference to reality. In this way her Monsters are entirely fictional, and the viewer can project their own character onto the portraits.

Transitions observes this artistic shift in Barrett’s work from reality-adjacent to entirely-imaginary through a rousing journey within her amusingly eclectic world.