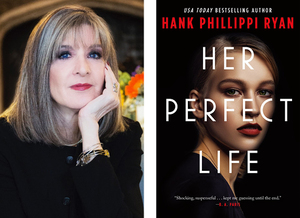 Hank Phillippi Ryan, author of "The First to Lie", joins us in-person to discuss her new thrilling and personal standalone novel.

Your $5 admission ticket can be put towards a copy of Her Perfect Life bought from Wellesley Books.

*Please note that this event is subject to change based on state and local public health guidance.

ABOUT HER PERFECT LIFE

Everyone knows Lily Atwood—and that may be her biggest problem. The beloved television reporter has it all—fame, fortune, Emmy awards, an adorable seven-year-old daughter, and the hashtag her loving fans created: #PerfectLily. To keep it—all she has to do is protect one life-changing secret.

Lily has an anonymous source who feeds her story tips about others—but suddenly, the source begins telling Lily inside information about her own life! How does he—or she—know so much?

Lily understands that no one reveals a secret unless they have a reason. Now she’s terrified someone is determined to destroy her world—and with it, everyone and everything she holds dear.

How much must she risk to keep her perfect life?

Hank Phillippi Ryan is the USA Today bestselling author of 13 thrillers, winning the most prestigious awards in the genre: five Agathas, four Anthonys, and the coveted Mary Higgins Clark Award. She is also on-air investigative reporter for Boston’s WHDH-TV, with 37 EMMYs and dozens more journalism honors. Book critics call her “a master of suspense,” “a superb and gifted storyteller,” and she’s the only author to have won the Agatha in four different categories: Best First, Best Novel, Best Short Story and Best Non-Fiction. Her 2019 standalone, The Murder List, won the Anthony Award for Best Novel. International bestseller A.J. Finn says, “exciting, explosive, relentless,” and the Library Journal starred review calls it “A must-read.” Hank’s 2020 novel is the chilling psychological standalone The First to Lie, nominated for both the prestigious Anthony Award for Best Novel and Mary Higgins Clark Award. The Publishers Weekly starred review says “Stellar…Ryan could win a sixth Agatha,” and bestseller Sarah Pekkanen says “Book clubs will gobble it up.” Watch for Her Perfect Life on September 14, which received starred reviews from Kirkus and Publishers Weekly, which called it “A superlative thriller.”