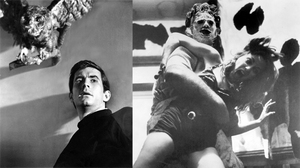 Celebrate Halloween at the Coolidge with a double-feature of two of the most infamous fright films in cinema history, both based on real-life ghoul Ed Gein: Alfred Hitchcock’s Psycho and Tobe Hooper’s The Texas Chain Saw Massacre.

Born of the same source material but created 15 years apart, these tales of terror spawned two of the silver screen’s most legendary killers: Norman Bates and Leatherface. Both feature iconic houses of horror, taxidermy, corpses in rocking chairs, dysfunctional families, and some of the most recognized camera shots in all of the genre. Join us for a night to dismember by spending the All Hallows Eve with these masterpieces of the macabre!