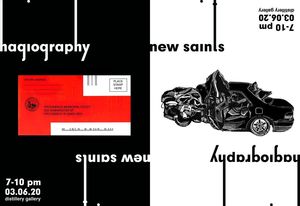 An exhibition examining how individuals and communities generate and maintain mythologies and ritual, specifically around identity.

hagiography:​ the writing of the lives of saints.

Interested in the faith systems and hagiographies of secular communities, ​Hagiography or New Saints​ examines sacred practices and symbols of fringe and marginalized communities. Seeking to better represent the essence of mystical phenomena, the sacred, veneration, and ritualization outside conventional religious spaces, this show is an ethnographically engaged experience in dialogue with the artists’ own lives and the manifestation of communal mythos. The intersection of identity and sacred practice as articulated through curation will evolve experiential interactions and between the historical concepts of spirituality and contemporary ritual.

Ria Brodell (pronouns: they, them) is a non-binary trans artist, educator and author based in Boston. Brodell attended the School of the Art Institute of Chicago and received a BFA from Cornish College of the Arts in Seattle and an MFA from the School of the Museum of Fine Arts/Tufts University. Brodell has had solo and group exhibitions throughout the United States, is a recipient of an Artadia Award, a Massachusetts Cultural Council Artist Fellowship and an SMFA Traveling Fellowship. Brodell’s work has appeared in the Guardian, ARTNews, The Boston Globe, New American Paintings and Art New England among other publications. Brodell’s book, Butch Heroes, was released in 2018 via MIT Press.


Shaka Dendy (pronouns: he, him) is a conceptual artist working to explore and complicate Blackness, by recontextualizing Black experiences and aesthetics in an art-historical framework. His interdisciplinary practice includes sculpture, performance, installation, video, and music, and makes use of conceptual art, minimalism, arte povera and the avant-garde, in order to critique and confront norms—all with a singular humor and wit.

He is a founding member of Boston-based industrial rap band Camp Blood, and received his MFA from Emerson College. He lives and works in Boston.


Ena Kantardžić (pronouns: they, them) is a queer interdisciplinary artist working in gay nightlife who creates work from immediate perspective. Growing up in Boston, by way of being born a refugee in Germany during the time of the Bosnian War, their work focuses on chaos and the phenomenon of spontaneous order. Currently, they are a degree candidate in MassArt’s SIM program.


Norlan Olivo (pronouns: he, him) is a Providence based artist, photographer, educator and musician. In 2012 Norlan's photography was featured in "Moving", a public arts project in partnership with Rhode Island State Public Transit Authority, where Norlan and his students had their photos displayed on the outside and inside of a RIPTA bus. An internationally touring musician, Norlan has performed in What Cheer Brigade, political punk band The Downtown Boys, and as a DJ going under the name Mr. Vibes. The Downtown Boys were named "2015's most exciting punk band" by Rolling Stone Magazine and have performed on Democracy Now!, Afropunk and Coachella. Norlan has musical releases on Don Giovani Records, Sister Polygon, Anchor Brain Records, Subpop and his projects have been written about in Stereogum, Pitchfork, Rolling Stone, the Providence Journal, Spin, and VICE.


Gregory Guy (pronouns: he, him) is a visual artist living and working on Long Island. He experiments with a variety of mediums, but works primarily in paint and photography. He’s heavily inspired by horror films and the world of special effects.

Georden West (pronouns: they, them) is a time-based artist whose work reflects the subculture, history, and daily lives of queer people through time-based filmic and installation experiences. T​heir Oscar-qualified work has screened at Outfest, the International Fashion Film Awards, and, most recently, won gold at the Student Academy Awards. Georden’s moving image work centers around the queering of art house film.

Georden was an Emerson Fellow and received their MFA from Emerson College where they serve as an affiliate faculty member.