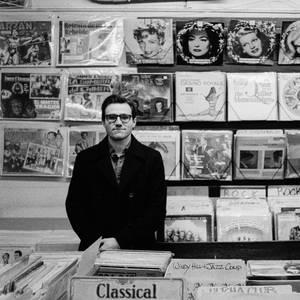 Boston's Griffin Robillard will perform at the Middle East Upstairs on November 1 with Humming House and Becca Mancari. Griffin recently released his debut album "Cracks in the Ceiling" in September to rave reviews and a national tour.

Boston’s Griffin Robillard fashions folk-tinged indie rock that bursts with vitality while simultaneously wrestling with life’s uncertainties. Cracks in the Ceiling, the twenty-two year-old’s full-length debut, pays homage to the Americana tradition while drawing from an expansive sonic and vocal palette. From Bryan Ferry’s nervy croon to Wilco’s early raw energy, Robillard casts a wide net to reinterpret what it means to make guitar music in ’17.

Both a songwriter and a frontman, his music has drawn comparisons to the point at which old meets new--“Rufus Wainwright meets Neil Diamond,” being amongst the most amusing. The Minneapolis native, raised on his musician father’s record collection of Jackson Browne and CSNY, began writing songs at age six and started to experiment with recording in high school out west in Salt Lake City, Utah. Playing everything from folk to grunge in various bands, Robillard eventually relocated to Boston to attend college, when he became serious about writing. “For a long time it was something I did in my spare time. A poem or song here and there. I went into college pursuing a biology degree. I failed spectacularly,” explains Robillard. Discouraged, he decided to go back to basics and hone his craft on the page first without his guitar, nurtured and mentored by novelist professors Elizabeth Graver, Christopher Boucher, and poet Kim Garcia. “Writing fiction and poetry was an itch that I could never satisfy and because what I was writing was just so bad, it just made it more frustrating. That’s probably why I ended up studying it at a university.”

Written over a year while living in Copenhagen, Denmark, Cracks in the Ceiling chronicles a time of profound change. “I had a fresh start, getting to know myself again after a really rough two years,” Robillard says. “In hindsight it was probably a form of depression, but the fog lifted and I also met my now girlfriend there. It was pretty overwhelming. I was writing as fast as I could.” The titular opening track, “Cracks in the Ceiling” recounts the feeling of a flood of optimism in the midst of intense doubt, beginning with a lone drum-loop as an array of acoustic and electric guitars slowly swell into a balladic chorus. “The first song is all about how love between two people can double your view of the world, but just because you see more-- through aging, experience, or the love itself-- doesn’t mean we can escape a lot of the half-truths we tell ourselves.”

“Whether it was writing poetry or songs, when I first started, I was blackening the page more or less, trying to emulate this very dark, introverted voice of my literary heroes,” he confesses. “It didn’t suit me at all! It was terrible, really. Think Nick Cave, Ian Curtis. I like humor and absurdity--it has to all be present or there’s no soul in the songs for me. I feel with these songs it was the first time I stumbled into my own voice.”

Robillard teamed up with producer Jon Niess, who assembled an all-star ensemble of Austin musicians at his studio, Austin Signal. With studio wizard Charlie Kramsky (Paul McCartney, Tony Bennett, Elvis Costello) on the board, the album was laid down in just four days and put in the hands of Erik Wofford (My Morning Jacket, Explosions in the Sky, Bill Callahan) for final mastering.