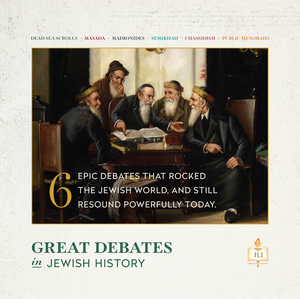 Great Debates in Jewish History explores six fundamental conflicts that pitted the greatest Jewish minds against each other—six instances of divergent perspectives, including several that are still debated today.

Discover stirring and surprising accounts that span two millennia of Jewish disputation, reflecting the panorama of Jewish history and its monumental political, ethical, and spiritual challenges. Encounter the gripping narratives of six fascinating eras, the intellectual tension and points of view they unearth, and the light they shed on the most fundamental of Jewish beliefs.

Great Debates in Jewish History raises such questions as: Why were the authors of the Dead Sea Scrolls opposed to rabbinic interpretation? What motivated the rebels at Masada? And what is the Jewish perspective on taking up arms in situations where defeat is inevitable? What role does nationalism play in Judaism? Are faith and reason are mutually exclusive? What motivated the anti-Maimonideans in banning—and even burning—some of Maimonides’s works? And is religion designed to be a private and personal experience, or one to be proudly paraded in the public domain?