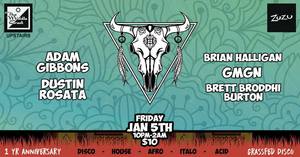 Working with music for over 20 years, Adam Gibbons is a known pioneer of the AfroHouse Movement. Playing dynamic and energetic sets with his ability to blend traditional African and Latin rhythms with modern electronic influenced music creating a soundscape that is his own. For inspiration and connectivity to the roots and culture of the music he creates and plays, Adam has traveled to seven African nations and has also studied the Olatunji method of traditional Yoruba hand percussion and Malian Manding style. He has played in clubs and festivals all over the world sharing the stage with heavyweight and grammy winning artists such as Femi Kuti, Bebel Gilberto, Oumou Sangaré, Louie Vega, Bill Laswell, Shiela E, As well as equally respected artists such as Tony Allen, Osunlade, Thievery Corporation, King Britt, Black Coffee, Ron Trent, Jazzanova, Quantic, Antibalas, Rich Medina and so many more. His current project Uhuru Afrika is known globally, hosts monthly events in Boston and one-off events worldwide. It's Soundcloud page has over 100,000 plays from all over the world. Adam was listed at #44 on the Traxsource Top 100 Afro House artists of 2016.

Boston based producer Dustin Rosata is a Lover of Disco and a practitioner of meditation. His production style gives off a spirited dance flavor touting a wide array of cultural influences, tapping into African drum rhythms and healing chants and melodies. With releases on Soul Clap Records, Kid Recordings, Mozzarella Records. Recently, Dusty has co-founded Grass Fed to further infuse his passion for building community around multi-cultural soundscapes that create a unified essence on the dancefloor.

Brian Halligan has held residencies in several Boston clubs, currently sip at Jacques Underground and Provincetown's historic A-House, as well as numerous guest spots around the city (including Houseboi, Boyfriends, Heroes, Superstition and FiftyFour), he is adept at moving a dance floor in many formats, from house and disco, to new wave, italo and techno sounds.

As co-founder of the collective Basement Movement, Brett Burton has become a lover and purveyor of the underground dance music community in Boston with roots in hip hop, soul, funk, house and tribal.