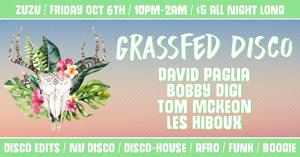 David Paglia has a musical style that is a well diversified palette including House, Techno, Disco, Soul, Funk, and Jazz. All serve in widely varied DJ Gigs as well as inspire his productions spanning underground house/techno and remixes/edits. Also, his taste for many genres has made for a vinyl discography spanning different vibes from daytime get downs and lounge atmosphere’s through warehouse after hour vibes. All DJ gigs are performed using mostly analog vinyl.
​
David relocated to Brooklyn over a year ago and has been fully embraced in New York City playing scene stalwarts Output, The Panther Room, Cielo, TBA, Bushwick A/V, Resolute, House Of Yes, Mixmag, Black Flamingo, Bogart House...

2017 has been equally exciting with repeat appearances at these amazing venues, his first monthly residency in Brooklyn at TBA, new releases on Soul Clap Records, Opulence in Canada, forthcoming release on Cenote Records in Boston and a vinyl EP due out late summer/fall on Gator Boots/Soul Clap Records.

Local groove enthusiast with a passion for the deeper shades of disco, house, funk, and tech.

Les Hiboux is a duo of two electronic composers, producers, and DJs from Paris. Their addiction to the 70s disco vibes made them naturally dig into the gems of nu-disco and funk edits to get their audiences to dance.

Their first production - released within a remix contest, curated by the label of Yuksek “Partyfine”- got excellent feedback from lots of music blogs as well as from Yuksek himself.

Since then, they released two original tracks, and a few remixes in their solo projects, which all got tremendous support from influential blogs such as The Vibe Guide or Chill Masters.

Performing-wise, they were booked in loads of trendy venues like Nuba in Paris, Bahn in Rotterdam, or Sala Lolita (Razzmatazz) in Barcelona.