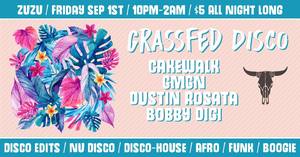 Growing up and cleaning the house to jazzy, soulful, disco funky stuff (thanks to his parents) while also getting that old school hip hop/R&B influence (thanks to his big bro) is where it all began for James Walker aka cakewalk. Jump ahead many years and musical phases later, after DJing college parties in Boston/NH and attending the MMMMaven DJ & Music Production courses, he quickly found his place in the Boston underground scene.

Since then cakewalk has become a resident with BINARY and Flight 617 which are two of the top underground parties in Boston. He has also shared the stage with electronic music hero's like Soul Clap, Purple Disco Machine, Way Out West, Little Boots, Chus + Ceballos, No Regular Play, Beckwith, and Ben Silver of Orchard Lounge.

This should give you an idea of the wide range of musical waves that can be present during a cakewalk set. Expect to hear anything from the funky sounds of disco to those deep latin tribal safari ride feels. Being known for playing multiple different parties and being able to catch a vibe while still blending genres is one example of what sets him apart from the basic DJs that are heard too often today.

From playing rooftop parties in NYC to international clubs like Habitat Living Sound, cakewalk is quickly making his name known and funking up dance floors all over the globe.

Dustin Rosata has been producing and DJing for nearly a decade and has become a mainstay in the Boston nightlife community. His Hip Hop roots brought him to a deep understanding of soul, disco, and house music and has allowed him to create inspired dance tracks for a number of heavy-hitting labels. Recently, Dusty has co-founded Grass Fed to further infuse his passion for building community around multi-cultural soundscapes that create a unified essense on the dancefloor.

Boston-based groove enthusiast with a passion for the deeper shades of disco, house, funk, and tech.