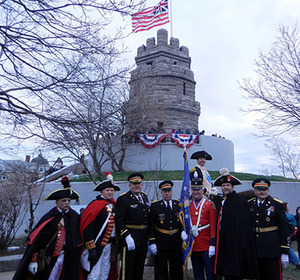 Every New Year’s Day the city of Somerville commemorates an important moment of the American Revolution The First Flag Raising. The event reenacts the one that took place on Prospect Hill on January 1, 1776.

This year, instead of gathering on Prospect Hill on New Year’s Day to reenact the raising of the Grand Union Flag (considered to be the first flag of the nation), you can tune in to a virtual celebration of this historical event. Beginning Friday, January 1, a pre-recorded ceremony will air on City Cable (RCN channel 13 and Comcast channel 22) and the City’s YouTube channel, www.youtube.com/SomervilleCityTV.