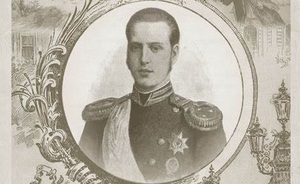 One-hundred and fifty years ago, in the autumn of 1871, Alexis Romanov, the fourth son of Tsar Alexander II of Russia, set sail for an extended journey through the United States and Canada. The first Russian royal ever to visit the United States, Alexis in America recounts the duke's progress through the major American cities, detailing his meetings with celebrated figures such as Samuel Morse and Henry Wadsworth Longfellow and describing the national self-reflection that his presence spurred in the American people. Alexis visited Niagara Falls, participated in a bison hunt with Buffalo Bill Cody, and attended the Krewe of Rex's first Mardi Gras parade in New Orleans. He also spent six days in Boston, where he stayed at the Revere House, and visited City Hall, the Old State House, and the Massachusetts Historical Society. He attended performances at the Boston Music Hall and was the guest of honor at a ball at the Boston Theatre.