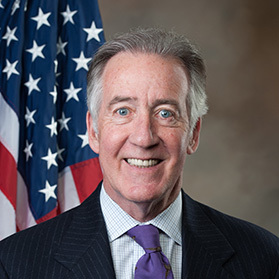 Congressman Richard Neal is serving his fourteenth term as the people’s representative in the United States Congress from the First Congressional District of Massachusetts, representing 87 cities and towns in the western and central part of the state. As Ranking Member of the Ways and Means Committee, he is the top Democrat. The Ways and Means Committee is known as the most powerful committee in Congress, and has jurisdiction over all tax and trade issues, Social Security and Medicare.

Additionally, Congressman Neal holds the unique position of Co-Chair of the New England Congressional Caucus, where he brings the regional issues and perspectives of New England’s six states to the forefront of the Congressional agenda. Over his career in Congress, Neal has been an advocate of fairness and simplification of the U.S. tax code, supporter of policies that increase the national savings rate, fought privatization of Social Security, promoted Financial Aid Seminars for college bound students and families, been instrumental in economic development initiatives throughout the district, and much more.