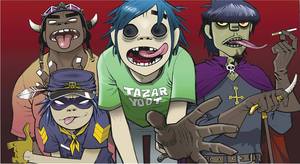 Gorillaz are hitting the road after the release of their upcoming Humanz album, due on April 28. The duo fronted by Blur's Damon Albarn and Jamie Hewlett announced a series of 17 tour dates Monday morning (Apr. 17), including a slot in this year's Life Is Beautiful Festival in Las Vegas.
This is not the official facebook event.

For their first North American outing in seven years the animated band will kick things of fin Chicago on July 8 with a show at the Huntington Bank Pavilion at Northerly Island, followed by stops in Toronto, Boston, Philadelphia and Quebec, with appearances at the Outside Lands Music & Arts Festival in San Francisco, the Meadows Music & Arts Festival in New York and the winding down on Oct. 13-15 at the III Points Festival in Miami, Florida.