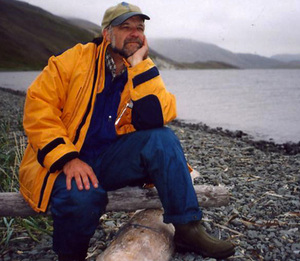 Goodbye, Ice is a poetic account of my wanderings in the Arctic from 1979 to 2019. As the title suggests, some of the poems are environmentally-oriented. Some of them are modified quotes from tradition-bound native people; their words were prose in my notebook, but turned into poems in my memory; and some of the poems are rants against the machinations of Man (Woman, too). If you like Robinson Jeffers, Al Purdy, or Walt Whitman, these poems are for you; if you like Ezra Pound or T.S. Eliot, they’re probably not.

Note: Goodbye, Ice is an in-progress work, and the author would not mind getting comments about the poems from his listeners.

Cambridge resident Lawrence Millman wears many hats. He is at once an Arctic explorer, an ethnographer, a mycologist, an adventure writer, and — recently — a poet. His 18 books include such titles as Last Places (translated into 11 languages), Our Like Will Not Be There Again (nominated for a Pulitzer Prize in nonfiction), Hero Jesse (nominated for a PEN/Hemingway Award), An Evening Among Headhunters (“A superb collection!” — Paul Theroux), At the End of the World (“Quite the best thing I’ve read in a long time.” — Paul Kingsnorth), and Fungipedia (“This little book is big fun.” — Michael Pollan). He has taught at Tufts, Harvard, University of New Hampshire, Goddard, and the University of Iceland.