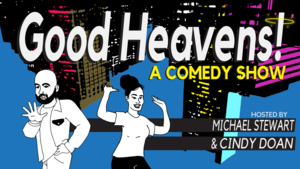 Good Heavens! Local Boston comedian Michael Stewart is back from Taipei for one week only and wants to celebrate with some of the wonderful people he's met over the years doing comedy in Boston. Atlanta native and fellow comic Cindy Doan (Laughing Skull Comedy Festival) will be coming from up New York to co-host a lineup of some of the most talented comics in the city they love! Featuring Worcester's "Janitor with Stamina" Jimmy Cash, with a headlining set (20 mins) and local stars Gabe Stoddard, Katie McCarthy and Will Martin.