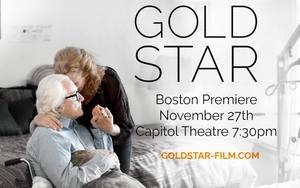 Critically acclaimed independent film GOLD STAR will have its Boston area premiere on 11/27.

Q&A discussion to follow the screening, hosted by film writer Raquel Stecher of Out of the Past. Filmmaker Victoria Negri and Composer Ben Levin will be in attendance.