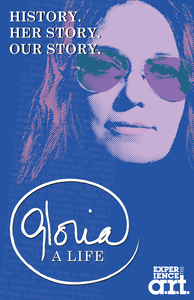 History. Her story. Our story.

This new play about Gloria Steinem and the women she has partnered with in a decades-long fight for equality is brought to life by a dynamic ensemble of performers. Fifty years after Gloria began raising her voice and championing those of others, her vision is as urgent as ever. Gloria’s belief in talking circles as a catalyst for change offers us all a path forward. The first act is Gloria’s story; the second is our own.