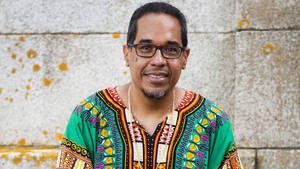 Led by Panamanian pianist and composer Danilo Pérez, the Global Messengers draws its unique spirit from the culture and experiences of its members, who hail variously from Palestine, Greece, Jordan, and Panama, with varied musical traditions and instrumentation to match. Danilo Pérez and the Global Messengers are committed to the ancient practice of building community through melodically rich and rhythmically exciting music. Led by trumpeter Amir ElSaffar, The Two Rivers Ensemble is a sextet of jazz and Middle Eastern musicians particularly notable for combining the maqam modal system -- which ElSaffar studied in Baghdad -- with American jazz. Deeply rooted in musical forms of Iraq and nearby regions, the music still speaks the language of swing, improvisation, and group interaction, and the resultant sound is distinct and enthralling. See these two groups live in concert at Sanders Theatre at Harvard University.