Global is Local/Local is Global Concert 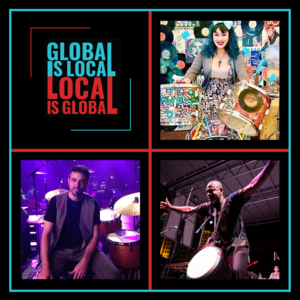 Highlighting music that knows no borders, three local artists take the stage at Hostelling International Boston for a night of global music that showcases the international communities of greater Boston. Hear their music and listen to their stories as each up-and-coming artist shares their own cultural and artistic journeys in a facilitated Q & A following each performance, led by Melissa Alexis, Community Affairs Manager at Hostelling International Boston.

Meridian 71
Meridian 71 is an eclectic and international ensemble of Boston-based musicians, led by Italian drummer and composer Giuseppe Paradiso. They perform original music that crosses boundaries, with influences ranging from jazz and improvised music to Mediterranean and West-African music traditions.

For Global is Local/Local is Global, Meridian 71 will perform as a trio with Giuseppe Paradiso on drums, Utar Artun on keys, and Galen Willett on electric fretless bass.

Sidy Maiga
From Mali, West Africa, Sidy Maiga has been drumming since his early teens, apprenticing with master drummers Alassane and Fouseiny Sissoko. He moved to the US in 2006, and has since become a regular on the music scene playing not only traditional Malian music, but a fusion of African, Latin, blues, and Brazilian music.

For Global is Local/Local is Global, Sidy Maiga will be performing with Balla Kouyaté.

Blythe Schulte
Blythe Schulte is a multicultural musician and innovator. Her Chinese, German, Scandinavian, French, British, Korean, and Irish ancestry gives her a distinct perspective. She has toured in the U.S., Asia, and Europe. She is also an actress, swing dancer, and Instagram influencer.

For Global is Local/Local is Global Blythe Schulte will be accompanied by fellow Berklee student, keyboardist Keith Chen.