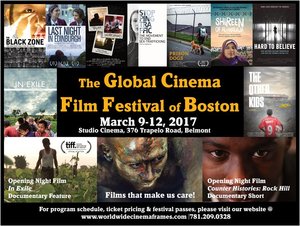 The Global Cinema Film Festival of Boston (GCFF) in partnership with WCF studios/films and under the direction of multiple award-winning Documentarian Raouf J. Jacob and award-winning Executive Producer Lara M. Moreno are committed to bringing the best of global cinematography to Boston. Our unflinching mission is to give filmmakers an opportunity to spotlight stories that deserve global attention. We believe that your lens is the most powerful witness to the human condition.

Come discover all the extraordinary films of 2017!

***All guests are invited & welcome to attend the awards ceremony***

For 2017 OFFICIAL SELECTIONS, program schedule, how to get festival tickets & information about GCFF VIP all access passes, please visit our website:
http://www.worldwidecinemaframes.com/global-cinema-film-festival