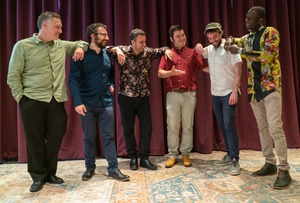 Meridian 71 is a cross-cultural music project created and led by Giuseppe Paradiso since 2012. The project name comes from Boston’s longitude: the 71st meridian that passes precisely through the eastern part of the city. Parallel Dimensions (Ubuntu Music, drops April 15 2022) the band’s third album, features original compositions by Giuseppe and performances by an eclectic and multicultural ensemble of well-established Boston-based musicians.
“Boston is the location where I met musicians from different parts of the globe. We are deeply connected and spoke the common language of music together”, reflects Paradiso. “It felt like I had known for a long time that at some point in my life I would have met musicians just like them, way before moving across the Atlantic in 2008. Meridian 71 became the creative laboratory and space to develop this music.”
Meridian 71 is more than a conceptual band; it’s a dynamic and ever-changing musical project with a revolving lineup and a driving vision to use music and sound to inspire, bridge cultures and create links within different traditions.