George Friedman — The Storm Before the Calm: America's Discord, the Coming Crisis of the 2020s, and the Triumph Beyond 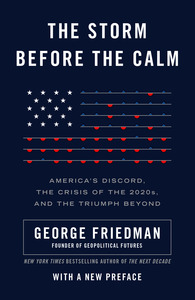 Join the Boston Public Library for an online talk with George Friedman, author of The Storm Before the Calm: America's Discord, the Coming Crisis of the 2020s, and the Triumph Beyond. The moderator for this talk, which is part of the BPL's Repairing America Series, will be BPL President David Leonard.

People who are interested in attending are kindly asked to register at the following link: https://boston-public-library.zoom.us/webinar/register/WN_ih8-XSAFRxSx5vUnhH379A.

*One of Bloomberg's Best Books of the Year*

The master geopolitical forecaster and New York Times bestselling author of The Next 100 Years focuses on the United States, predicting how the 2020s will bring dramatic upheaval and reshaping of American government, foreign policy, economics, and culture.

In his riveting new book, noted forecaster and bestselling author George Friedman turns to the future of the United States. Examining the clear cycles through which the United States has developed, upheaved, matured, and solidified, Friedman breaks down the coming years and decades in thrilling detail.

American history must be viewed in cycles—particularly, an eighty-year "institutional cycle" that has defined us (there are three such examples—the Revolutionary War/founding, the Civil War, and World War II), and a fifty-year "socio-economic cycle" that has seen the formation of the industrial classes, baby boomers, and the middle classes. These two major cycles are both converging on the late 2020s—a time in which many of these foundations will change. The United States will have to endure upheaval and possible conflict, but also, ultimately, increased strength, stability, and power in the world.

Friedman's analysis is detailed and fascinating, and covers issues such as the size and scope of the federal government, the future of marriage and the social contract, shifts in corporate structures, and new cultural trends that will react to longer life expectancies. This new book is both provocative and entertaining.

To purchase signed copies of The Storm Before the Calm from Trident Booksellers & Cafe, one of the BPL's community bookstore partners, please visit their website via the following link: https://www.tridentbookscafe.com/event/bpl-event-george-friedman-%E2%80%94-storm-calm-americas-discord-coming-crisis-2020s-and-triumph-beyond.

George Friedman is founder and chairman of Geopolitical Futures, which specializes in geopolitical forecasting. Prior to this Friedman was chairman of the global intelligence company Stratfor, which he founded in 1996. Friedman is the author of six books, including the New York Times bestsellers The Next Decade and The Next 100 Years. He lives in Austin, Texas.