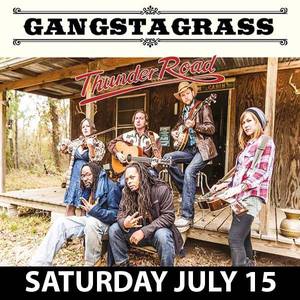 “There are a lot more people out there with Jay-Z and Johnny Cash on their iPod playlists than you think.” says Rench, mastermind behind the genre breaking sensation Gangstagrass. He should know. He’s spent the last couple years traveling the country, performing with a groundbreaking band that gives them the best of both.

Rench produced honky-tonk hip-hop recordings on his Rench Audio imprint for the last decade, while making beats for local NYC rappers and hosting country music nights in popular NYC venues. In 2007, Rench had a musical itch that needed to be scratched – he was listening to the 1970s recordings of Ralph Stanley and the Clinch Mountain Boys and couldn’t help imagining what classic bluegrass would sound like with rap vocals and beats. The result was a genre-demolishing blitz called Rench Presents: Gangstagrass. He put it up for free download and people took notice. Hundreds of thousands of downloads followed creating an intense underground buzz.

When FX Network came to Rench looking for the Gangstagrass sound for the theme song to their new series Justified, he had bluegrass players lay down an original track with rapper T.O.N.E-z, the younger brother of early hip-hop legends Special K and T-LaRoc. The result was "Long Hard Times To Come," the song that opens every episode of the series, now in its final season. "Long Hard Times To Come" was nominated for an Emmy Award in 2010, contending for best theme song after critical praise and massive fan response!