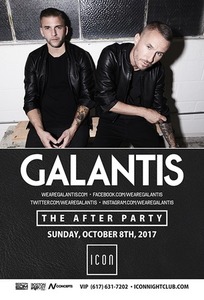 Dress Code:
NO gym sneakers, hats, jerseys, shorts, flip flops / sandals or work boots
Dress sneakers will be allowed but up to...

Artist Biography:
Featuring Christian Karlsson of Miike Snow and Linus Eklöw from Style of Eye, Galantis are a Swedish superduo who represent the place where EDM and pop meet. Karlsson (the man behind hits like Britney Spears' "Toxic") met Eklöw (the man behind hits like Icona Pop's "I Love It") at the Robotberget studio in Stockholm. Their mutual admiration society turned into a project once they began discussing a more poignant style of EDM that retained pop's passion. The duo set up shop on the Stockholm archipelago in the Baltic Sea, began recording, and released the "Smile" single on the Atlantic label in late 2013. The hit single "Runaway (U & I)" followed in 2014, while their debut effort, Pharmacy, landed a year later. The album featured two new singles, "Gold Dust" and "Peanut Butter Jelly." The following year, the duo released the single "No Money," which became their first song to debut on the Billboard Hot 100. That same year also saw the release of "Love on Me," a collaboration with Aussie DJ Hook N Sling, and in 2017 they released a remix of singer/songwriter/pianist Wrabel's "Bloodstain." Singles continued to roll out, including "Hunter," "True Feeling," and "Girls on Boys," which featured singer Rozes. The duo's sophomore set, Aviary, arrived that September.