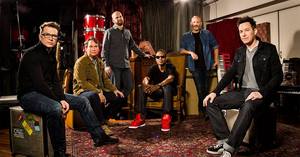 Drawing upon the vibrant funk, R&B, and jazz traditions of their native New Orleans, Galactic built a loyal following with their own brand of jam-based grooves. Emerging in the mid-'90s, the six-member group led by co-founding members guitarist Jeff Raines and bassist Robert Mercurio, and featuring noted drummer Stanton Moore, drew inspiration from legends like the Meters and the Dirty Dozen Brass Band, as well as iconic R&B artists like Maceo Parker and Parliament, a sound displayed on albums like 1996's Coolin' Off and 2000's Late for the Future. Ever interested in cross-pollinating their sound, they've continued to evolve, exploring Brazilian rhythms on 2012's Carnivale Electricos and connecting with contemporaries and elder statesmen alike, including Mavis Staples and Macy Grey, on 2015's Into the Deep.

Formed in 1994, Galactic was the inspiration of childhood friends and Chevy Chase, Maryland natives guitarist Jeff Raines and bassist Robert Mercurio, who moved to New Orleans to attend Tulane and Loyola Universities, respectively. During college they became enamored of the local funk, jazz, and R&B scenes and looked to form their own band. Originally an eight-member ensemble, the group was eventually pared down to a sextet featuring Raines and Mercurio, organist Rich Vogel, saxophonists Ben Ellman and Jason Mingledorff, and drummer Stanton Moore. Adding vocalist Theryl DeClouet, Galactic built a fervent local following, playing a tireless schedule of live shows including opening slots for their idols the Meters, longtime James Brown saxophonist Maceo Parker, and the similarly inclined jazz outfit Medeski, Martin & Wood. In 1996, Galactic issued their debut album, Coolin' Off. Crazyhorse Mongoose followed two years later, after which Mingledorff left the band.

The rowdy and expansive Late for the Future arrived in 2000, with the electronic-tinged Ruckus following in 2003. In 2007, Galactic issued From the Corner to the Block, which featured guest appearances by Troy "Trombone Shorty" Andrews, Mr. Lif, and DJ Z-Trip. Also during this period, they contributed to the Hurricane Katrina charity compilation A Celebration of New Orleans Music to Benefit the Musicares Hurricane Relief, as well as Goin' Home: A Tribute to Fats Domino. There were also concert albums showcasing the group's appearances at New Orleans Jazz Fest in 2008 and 2009.

In May of 2015, Galactic signed with Provogue and issued Into the Deep. Produced by Ellman and Mercurio, the set featured guest appearances by vocalists including Macy Gray, Mavis Staples, and Maggie Koerner. Also included on the album was the single "Right On," with soul singer Charm Taylor. Over the next few years, the band stayed active, touring and appearing at New Orleans Jazz Fest. A single, "Hold on to Let Go," arrived in 2018.