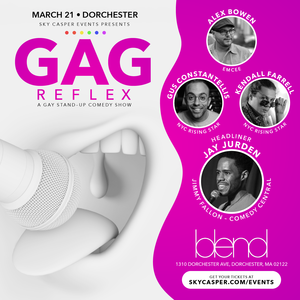 Sky Casper Events & Queer Comedians Present:
Gag Reflex: A Gay Stand-Up Comedy Show
Grab your friends and frenemies for a night with some of the world’s funniest gay stand-up comedians. Whether you are a tiny twink or a big ol’ bear, you’re sure to bust a gut! Everyone is welcome

Check out our stellar lineup:

Jay Jurden (Headliner) is the first returning Gag Reflex comedian, after being a crowd favorite last show. He is bringing us a whole new set! Jay is a comedian, writer and actor. He has been featured on MTV News’ “Need to know,” recently performed on the Tonight Show Starring Jimmy Fallon, and was just featured on Comedy Central. Timeout New York named him one of the “Comedians to watch in 2019.” He has also been awarded “Best LGBTQ Comic” by Manhattan Comedy Festival, was the first winner of the Comedy Mob Festival, and he is a StandUp NBC finalist alum.

Gus Constantellis is a first generation Greek-American stand up comedian/writer. He regularly performs at Caroline’s on Broadway, Stand Up NY, Broadway Comedy Club, all over the tristate area, and Los Angeles. His material deals heavily with his large immigrant family, his Greek heritage, raunchy yet relatable dating stories, and his unique perspective on growing up in Brooklyn. He is also a writer for Disney Channel and Nickelodeon. When he’s not performing, he’s usually dancing to Lady Gaga and Bruce Springsteen and watching Grey’s Anatomy.