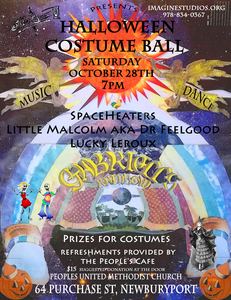 The SpaceHeaters, are an eclectic group of musicians who have been friends even longer than they have been bandmates. Known for their diverse and far ranging musical interests, the Heaters blend Rock, R&B, Soul, Funk and Folk Rock sensibilities to create a musical tapestry that is highly listenable and decidedly danceable.

Also appearing:
New Orleans style pianist and guitarist Malcolm Carnwath aka Dr. Feelgood was first influenced by the Philidelphia folk/blues scene, where all the reigning stars of the day played, from Mississippi John Hurt to Sonny Terry and Brownie McGhee and Dave Van Ronk. He moved to Newburyport in 76 where he headed up the Blues band Little Malcolm and the Mal FUNK Shuns for 30 years.

British born singer-songwriter-guitarist Lucian Parkin, aka Lucky Leroux, cut his chops as a busker, playing on the streets and clubs of Canada coast to coast. His style ranges from folk to blues to jazz, with lyrics chock full of social and political wit and poetic witticism. As the co-founder and artistic director of Imagine Studios he has supported and fostered the musical community spirit in the greater Newburyport area for decades.

Bassist/guitarist Chuck Walker is the front man for the Chuck Walker Jazz trio and Cuppa Joe, a roots, blues and rock n roll quartet. He is also a music educator and community music organizer.