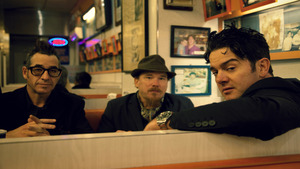 G. Love and Special Sauce was formed in Philadelphia in 1993 by Garrett Dutton aka G. Love (vocals, guitar, harmonica) and Jeffrey Clemens (drums, vocals). After working as a duo for a few months, they recruited Jim Prescott on string bass to complete the band’s line up. Their musical style falls under the alternative hip hop genre is a unique blend of laid back, sloppy blues with the production effects of classic R&B and rap music (the Beastie Boys, in particular). They released their eponymous debut album in 1994 and one of its tracks (Cold Beverage) became a staple on college radio. It got enthusiastic reviews by the critics and went on to achieve Gold status in the US. They have had a stellar career with 8 studio albums, 2 compilation albums, 1 live album, 17 singles, and 5 bootlegs/demo tapes. 4 of their studio albums have landed in the top 5 slot of Billboard’s Heatseekers Albums chart (with 1 album hitting #1) and their latest album (Love Saves The Day) features collaborations with many renowned artists such as Lucinda Williams, Citizen Cope, and David Hidalgo of Los Lobos.