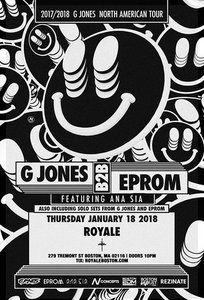 A new wave of genre bending bass music has started to take over the underground scene in Northern California. It's glitchy, it's dubby, it's trappy, and it's been driving people absolutely wild. One of the most prominent artists responsible for driving this movement forward with his amazingly creative and hard hitting music is G Jones. Since 2012, this Santa Cruz native has been shaking up the underground scene something fierce, and in no time at all has risen to become one of the Bay areas hottest artists. Recently, his latest album Eyes, along with uniquely diverse collabs with Bleep Bloop, Grimblee, Mad Zach, & the Widdler have been receiving massive support from big names like Zeds Dead, Dj Shadow, Nastynasty, & Pretty Lights. When he plays live, no G Jones show is ever the same, his on the fly remixes and breakdowns of his own music keeps the crowd on their toes and begging for more long after he's done.

EPROM is one of the vibrant West-Coast scene's most colourful characters and an important cog in the international Rwina machine. He's a consummate post-millennial producer, and his sound varies from toxic hip-hop to searing garage mutations to bizarre concoctions somewhere in between. His beats jiggle and drip and contort wildly, always in some perpetual state of melting, churning, and mutation. He's had releases on Warp, Surefire, and Bristol-based Bad Acid, but it's his Rwina releases that have been the most visible and enduring, whether it's the timestretch torture and fierce melodic geysers of "Humanoid" or deconstructionist mayhem of his "Pipe Dream" EP, where dubstep and grime collide for a staggering beast that shakes off heavy blotches of radioactive fluorescent sludge with every beat that lands. His live sets are something to behold as well, emphasizing the hip-hop roots that lurk underneath his sewer beats, and an hour of EPROM is bound to turn your brain into to the same sort of goo that gums the gears of his distinctive beats.