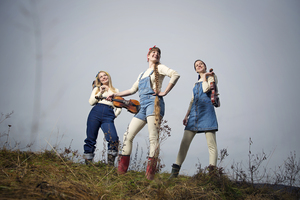 The music of Fru Skagerrak takes you on a journey through Scandinavia; from lowlands to mountains, from slow airs to lively polkas, in major and in minor, and everything in between. Fru Skagerrak- ”Lady Skagerrak” – are three master musicians – one from each Scandinavian country: Maja Kjær Jacobsen from Denmark, Elise Wessel Hildrum from Norway and Anna Lindblad from Sweden.

In 2011, these three globetrotting musicians met for the first time at Tønder Festival, Denmark’s biggest Folk Festival, in a roaring session that had engulfed the backstage bar. Through the mayhem of tunes you could feel a certain Scandinavian groove, and in that moment the connection between these three fiddlers was clear. After meeting at Tønder Festival for three consecutive years, Fru Skagerrak finally saw the light of day in August 2014.The trio brings together the diverse traditions from each of their homelands, which surround the Skagerrak strait. Through a repertoire of traditional tunes, new compositions, and songs in their respective languages, they express their kinship and love of their shared heritage. The result is an explosion of the sounds that exist in Scandinavian music today.