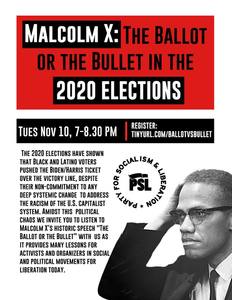 1964 was a pivotal year for the United States; it was an election year just like 2020, billed to the masses of people as “the most important election of our lives.” Fifty six years later history has not been kind to that formulation, as the rights won in the Civil Rights Act of 1964 and the Voting Rights Act of 1965 have been severely weakened to the point where voter suppression of Black, Latino, Native, and Asian Americans is still a defining feature of the U.S. electoral process.

Roxbury’s own Malcolm X (El-Hajj Malik Al-Shabazz) faced a similar dilemma in 1964 that we face today; how do those of us who have been ruthlessly oppressed and exploited desire, and still desire fundamental social change orient ourselves to the two major corporate backed parties - the Democrats and the Republicans? On the heels of the March on Washington in 1963, the assassination of President John F. Kennedy, the passage of the Civil Rights Act of 1964, and President Lyndon B. Johnson’s 1964 re-election campaign, Malcolm X provided an incisive analysis of the two-party system and its grip on American political life, especially that of the Black community.

Many of the lessons that Malcolm X imparted to us are more relevant now than ever.

The 2020 elections have shown that Black and Latino voters pushed the Biden/Harris ticket over the victory line, despite their non-commitment to any deep systemic change to address the racism in the DNA of the U.S. capitalist system. 2020 was a year of unprecedented and internationally supported Black rebellion following the murder of George Floyd in largely Democratic cities and towns. With a Biden victory nearly secured many are asking themselves “what’s next?” and “how do we push Joe Biden to be more progressive or to the Left.” Amidst this political chaos we invite you to listen to Malcolm X’s historic speech “The Ballot or the Bullet” with us as it provides many lessons for activists and organizers in social and political movements for liberation today.