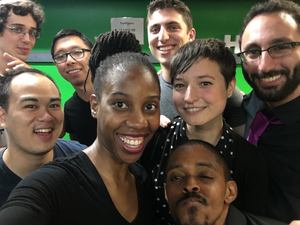 Freestyle by Milk Money featuring The Quarry!
Gather your coins and bills for a night of Improv, Beatboxing and Hip Hop for just $10!

----
Inspired by a single audience suggestion, Milk Money combines longform improv and freestyle rap to create an unforgettable one-time only comedy experience. Milk Money got its start as part of ImprovBoston's Studio 40 and have been doing improv and spitting rhymes ever since at ImprovBoston and improv festivals like the Del Close Marathon in NYC and District Comedy Festival in DC. Freestyle is a fast-paced, off the walls show that won't just have you laughing, it'll have you bopping your head and singing along. Whether you're a hip hop head, comedy fan, or just somebody with ears, this show has something for everyone.

The Quarry
With just a suggestion, audiences will meet an opinionated cast of characters all thrown in the same room together. This will inspire The Quarry to explore a world full of unique characters. Maybe it's a new planet or an office building, an aquarium or a football stadium. Wherever it is, we'll only see it once.