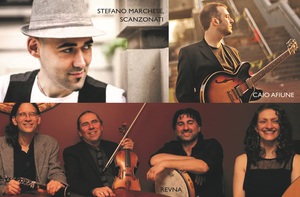 The North End Music and Performing Arts Center (NEMPAC) is thrilled to announce that their annual Summer Concert Series, in partnership with the City of Boston, will return to the Paul Revere Mall in the North End this summer to offer free outdoor concerts each Thursday in July. Main stage concerts will begin at 6:00 p.m. and run until 7:30 p.m., and each performance will be preceded by a special NEMPAC student feature at 5:30 p.m.

The Concert Series will kick off on July 6th with the North End favorite Scanzonati, featuring contemporary Italian jazz music. Community Night on July 13th will feature local bands and musicians selected by NEMPAC (artists TBA). The Series will close with REVMA (authentic Greek roots music) on July 20th and Caio Afiune (Brazilian Ensemble) on July 27th. All performances are free and open to the public.

Originally from São Paulo, Brazil, Caio did his undergrad at Faculdade Santa Marcelina, where he was the youngest student to ever enroll in the music program, at age 16.

After graduating, Caio moved to Boston in 2011 after receiving a scholarship to attend New England Conservatory, where he studied with several of his musical idols, including Jerry Bergonzi, Brad Shepik, Frank Carlberg, Jason Moran and Miguel Zenon. At NEC, Caio was part of the NEC Jazz Orchestra and shared the stage with jazz greats Dave Holland, Bob Moses, and Fred Hersch.

Since moving to the United States, Caio has been performing extensively as a leader and a sideman not only in Boston, but also in New York, Vermont, Washington D.C, and Chicago, as well as Brazil and Australia.

In 2014, after multiple performance and workshops at the Panama Jazz Festival, Caio was selected to be part of the Betty Carter Jazz Ahead program, directed by Jason Moran. That same year Caio recorded his self-titled debut album, featuring exclusively original compositions. “Prebenda”, the opening track was awarded an ASCAP Young Composer Award, and “Dido”, the closing track, was an official finalist in the 2015 Hollywood songwriting competition and won the 2016 Downbeat Award for best composition.

Caio has played with Jerry Bergonzi, Luciana Souza, Jaques and Paula Morelenbaum, Phil Grenadier, Bertram Lehman, among many others, and is currently finishing his doctoral degree in jazz performance at New England Conservatory.