FREE Shakespeare on the Common 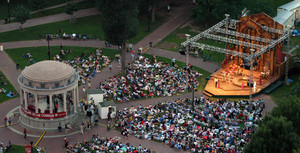 Now entering its 24th season, CSC’s Shakespeare on the Common has become an annual Boston tradition, modeled along the lines of “Shakespeare in the Park” in Central Park and the many other free outdoor summer Shakespeare events throughout the country.

Free Shakespeare on the Common returns to the Common in 2019 with Shakespeare’s lovely mystical dramedy Cymbeline. The play chronicles the fates of King Cymbeline and his family through a journey of deception, intrigue and separation. Join his daughter Imogen, one of Shakespeare’s most beloved heroines, as she is swept into a nearly mythic realm of mistaken identities, twists and turns, and the all-consuming quest for true love.

Performances are FREE and open to the public.

Tuesday–Saturday at 8pm, Sundays at 7pm (off Mondays)