FREE PRE-SCREENING: An American Story: Race Amity and the Other Tradition 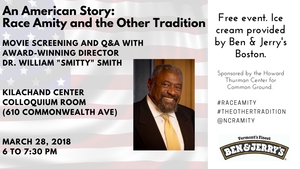 Brought to you by the National Center of Race Amity, join us for an exclusive pre-screening of the documentary An American Story: Race Amity and The Other Tradition. Focusing on impacting the public discourace and tackling racism through friendship and collaboration, this documentary is a source of inspiration which discusses the "better in us" - a collective perspective in the current climate of national disunity across racial differences.

Award-winning director and creator of the film Dr. William "Smitty" Smith will also be hosting a Q&A discussion after the screening.

Sponsored by Boston University's Howard Thurman Center for Common Ground and Ben & Jerry's Boston, there will be FREE BEN & JERRY'S ICE CREAM provided at the event!