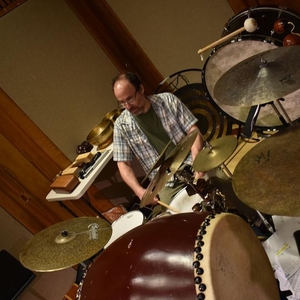 Eric Rosenthal, drums, percussion, leader
And a leading musician in the Boston Jazz/Improv scene for many years!
with more Boston creative musicians:

Free Form, Electronic Jazz-beyond-Jazz and Improv as dictated by the moment, musicians, listeners, environment, atmosphere, everything, everybody present…

Eric Rosenthal, drummer, the former student of Ed Blackwell has studied and performed more than American jazz drumming; he has also delved into West African traditional and South Indian classical percussion. Rosenthal has performed and improvised with Anthony Braxton, Mat Maneri, Pandelis Karayorgis, Mario Pavone, and the Either/Orchestra. He has performed all over North America and Europe, and appeared in Greece at the Patras Jazz Festival, at Montreal's North Sea Jazz festival, even at Finland's Pori Festival. Besides producing his own improvised music recordings, he also appears on CDs with the Hypnotic Clambake and the Zairean soukous band Freestyle.The late '90s found Rosenthal busy in the group Naftule's Dream. The band has two releases on John Zorn's Tzadik label, Search for the Golden Dreydi and Smash, Clap! In Boston, Eric has curated the .01 percent improvised music series at the Lilypad, keeping the “underground ” better than alive and well !

Electronics guru, drummer Andrew Neumann indulges in some mischievous hijinks on this new release titled, Scramble: Lock: Combination. Armed with an arsenal of digital delays, MIDI paraphernalia, computer software and a drum machine, Neumann improvises his way through this curiously interesting affair which at the very least should provide some thrills for the tech-heads out there. ... All About Jazz. Andrew also works in a variety of other media, including sculpture, film and video installation, He has received numerous awards and a residencies and a Guggenheim Fellowship.

Forbes Graham, recognized nationally and particularly in metro Boston as a force in Jazz (beyond Jazz) and more, is a creative composer, musician, sound artist, and visual artist whose work explores themes of simultaneity, perceptibility, transformation and collage. His work "Encounters I" for trumpet, electronics, and voices premiered at Roulette in 2019. He performed with Michael Pisaro at (the) co-incidence festival in 2017 and has appeared at other music festivals including High Zero, Vision, and The Thing In The Spring. He was commissioned to write a piece for the Festival of New Trumpet, and has created work for the avant-rock ensemble Normal Love.

The Creative Music Series is proud to support these musicians and live music!