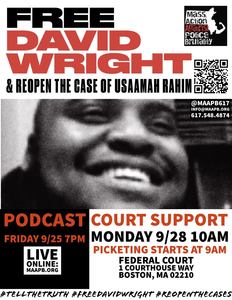 Mass Action Against Police Brutality demands the immediate release of David Wright from federal custody and the reopening of the case of Usaamah Rahim. All officials involved should be prosecuted to the fullest extent of the law.

David Wright has been held under federal custody since June 2, 2015. That same day, plainclothes Boston PD and FBI officers acting as the Joint Terrorism Task Force confronted Wright's uncle, Usaamah Rahim, as he was waiting for the bus on his way to work. They then shot him in the back and torso when he allegedly 'lunged at them with a knife.'
While video evidence is inconclusive that Rahim was carrying a knife in his hand when shot, neither the knife he was allegedly carrying, nor the sheath it was allegedly pulled from had Rahim's fingerprints on them. Additionally, the video contradicts the report that he lunged at the police. Based on the officer's testimony, then Suffolk DA Daniel Conley ruled it a justified shooting and did not file any charges against the officers. The family, Mass Action Against Police Brutality, The American Civil Liberties Union of Massachusetts, Council on American-Islamic Relations Massachusetts Chapter (CAIR-Massachusetts), and Muslim Justice League all demand the reopening of the case.

The First Circuit Court of Appeals overturned Wright's conviction on conspiracy to provide material support to a designated foreign terrorist organization charge because 'the evidence . . . fails to show that there was ‘overwhelming’ evidence that Wright had conspired to kill Geller and others ‘at the direction of’ ISIS,” Justice David J. Barron wrote. Yet Wright remains convicted on charges of conspiring to commit acts of terror transcending national boundaries despite evidence that corroborates the fact that Wright never had any meeting with a foreign entity in person or electronically.

Nicholas Rovinsky, who testified against Wright, was also sentenced to 15 years in prison for conspiracy to provide material support to a designated foreign terrorist organization. Curiously, Rovinsky, citing COVID-19 and complications with cerebral palsy, was recently released with time served and a 10 year home monitored probation.

Wright now has a resentencing hearing this September 28, Monday, 10 am, Joseph Moakley Federal Court, in light of his appeal victory. Yet the prosecution is still seeking life imprisonment for Wright.

David Wright and Usaamah Rahim were targeted, jailed, and killed essentially for something they looked into and talked about, not something they did, which is a dangerous threat to everyone's rights. Wright's lawyer Jessica Hedges commented at Wright's trial.

“Freedom of speech matters in the United States...We can be incredibly angry at what someone reads, what someone says and what someone talks about and not convict them as a criminal for it."

Join Mass Action Against Police Brutality, September 28, to pack the inside and outside of the courtroom to demand the immediate release of David Wright from federal custody and the reopening of the Usaamah Rahim case and all other cases of police brutality!