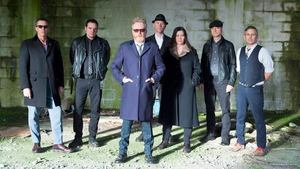 Founded in Los Angeles in 1997, Flogging Molly has always defied categorization. The infectious originality of their songs is a badge of honor and key to the band's creativity, their urgency. They infuse punk rock with Celtic instruments—violin, mandolin and the accordion—and they merge blues progressions with grinding guitars and traditional Irish music. "We're not a traditional band," explains Dublin-born frontman Dave King. "We are influenced by traditional music and inspired by it, but without question we put our own twist on it." Theirs is music of exile, rebellion, struggle and history. The band's only criteria for its music are simple and bone-deep: that it matter.

The social and political awareness that drives Flogging Molly’s music is never more prominent than in their upcoming new album LIFE IS GOOD out on June 2nd (Vanguard Records). Their sixth studio album, LIFE IS GOOD is the band’s strongest release to date highlighting their finesse to tell meticulously crafted ‘stories’ with fierce and bravado arrangements.

LIFE IS GOOD is the follow up release to 2011’s Speed of Darkness which landed at #9 on Billboard’s Top 200. In 2002, Drunken Lullabies was released and certified Gold. Float, released in 2008, was a deeply stirring and personal album recorded in King's native Ireland. Through all of this, Flogging Molly—first, last, and always is a live band— playing raucous and adrenaline-fueled shows in bars, pubs, and major rock festivals in North America, Europe, and Japan. "In Ireland," King says, "you go to the pub to have a conversation. That's what we do every night on stage, go to the pub and trade stories." In 2010, to showcase their unparalleled and limitless energy on stage, the band released Flogging Molly: Live at the Greek Theatre, a three disc set chronicling their legendary sold out shows at one of LA's most famous music venues.

Flogging Molly has always put their fans before commercial success, and they've always put their music before marketability. The rewards of such independence and integrity are undeniable. You feel it from the first note to the last, the pathos and the passion, the sweeping and rollicking electricity of inspiration.